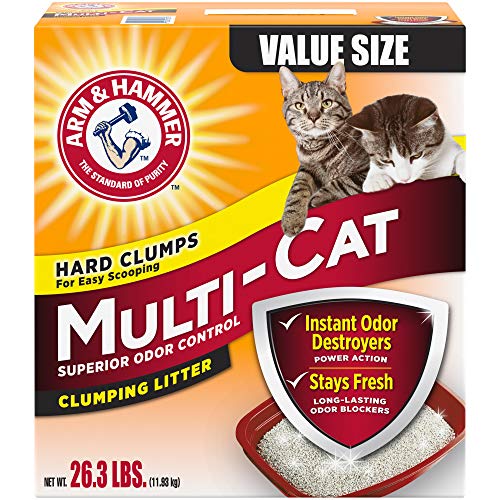 Tracking can be an issue

It also stresses that a fresh scent will be released every time one of your cats uses their box.  All of this with an advertised 99% dust-free rating and overall low tracking.  This clay-based litter is available in 26.3 and 40-pound boxes.

Who This Cat Litter is Intended For

This cat litter is designed for those who have a multiple cat household and are in search of maximum odor control beyond all else.  They are willing to deal with somewhat dusty clay to reduce cat smells for multiple days.  It is also acceptable for those on a tight budget and looking to find a nicely performing litter for an affordable price.

What Makes This Cat Litter Unique

This cat litter is one of the most aggressive at marketing its ability to fight odors in multi-cat boxes.  It doesn’t try to stand behind having a natural litter smell and it isn’t nearly as adamant about having low dust levels or clumping ability as most other products, and instead, focuses on its scent-fighting.  A lot of the time this aggressive of an odor stance is only found in crystal-based litters and this being a clay means that it is somewhat special and also comes at a much more affordable price.

The clumping ability of this litter is only decent and gets noticeably worse with more cats using it.  This is a bit frustrating as this product is marketed as being good for litter boxes being used by multiple cats.  The clumps that do form are oftentimes not very hard and can easily fall apart while being moved or removed.  This can result in a pasty concoction that can be very frustrating to clean and can easily stick to both the box as well as cat paws.

Overall this product does a pretty good job of masking the smell of cat feces and urine.  Also, the smell of the litter itself isn’t overpowering.  This can be helpful for those cats and owners with very sensitive senses of smell or particular allergies.

Unfortunately, when the clumps fall apart a lot of the smell is released back into the air so it is important to be timely about removing clumps.  If you don’t, the litter box could get stinky very quickly, especially if multiple cats are using it as it is intended for.  We were a bit disappointed that a product that markets at being a very powerful smell suppressant seemed to struggle when it was put under the strain of multiple cats using it.

When the clumps fall apart things can get pretty messy.  Tracking can be a problem with this product, and in many cases, some will stick to that bottom of the cat’s paws during use.  So the more cats that are using the litter box the bigger of an issue it becomes  The broken clump residue easily sticks to the cat box as well which can be frustrating to clean.  Dust is about average for this type of litter.

This litter can be had online for a budget to mid-priced level.  This is about on-par for what we look for in clay litter asking prices.  But even though it has a reasonable price, there are some issues present that make us a bit wary.  Sure, if this litter was on the ultra-budget end of the spectrum then we could overlook them.  But that isn’t the case.

The Arm & Hammer Multi-Cat Extra Strength Cat Litter Review earns 2.5 cats out of 5.  A very underwhelming product.  It does nothing particularly well but isn’t terrible at anything, either.  For an advertised multi-cat solution we think that it has too many struggles when multiple cats use it, but it should be fine for a single cat.

You could make an argument that its struggles with keeping clumps in one piece would push it down from a neutral buy to slightly avoiding a recommendation  But at its reasonable price, we can’t be too picky.  However, there are better choices out there even at this price tier.