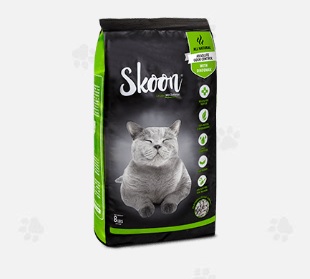 Little in the way of tracking

More expensive than most clay litters

One of our readers recently informed us about Skoon Cat Litter. We had never heard of this brand beforehand. But after browsing around Skoon’s website, this new cat litter brand seems to be making a splash.

Skoon takes a unique approach in their cat litter. Instead of being made of clay, silica gel, wood, or one of the other more common materials out there, they instead are utilizing what are called diatoms. A diatom is a single-celled alga that has a cell wall of silica. So in a way, this litter could be considered a sort of “silica gel” hybrid that has some traits of a clay cat litter.

This litter is formed by minerals distributed from volcanic eruptions mixing with diatoms and precipitating to the bottom of lake beds and fossilizing. Pretty dang cool!

These pebbles are also exposed to Diatomax, which is a proprietary thermal activation process.  According to the manufacturer, this “superchargers” the absorption capabilities of the litter.

The secret sauce that makes Skoon Cat Litter supposedly performs so well lies in the microscopic structure of these diatom pebbles. As you can see in the image above, these pebbles are quite porous. This means that there is a lot of surface area for absorbing liquids. And another side effect of this is that these pebbles are extremely lightweight. Skoon states that they are up to four times lighter than regular litter.

In the next few sections, we will go over the various parameters that we consider while testing a cat litter.

Skoon Cat Litter isn’t designed to clump. Rather, you are encouraged to stir the contents around when your cat urinates on it.
For solid waste, you are supposed to remove them. Because of this, Skoon operates similarly to many of the crystal cat litters that we have used. These types of litters aren’t intended on handling solid waste long-term. It will dry out the solids but you are expected to manually remove them.

The good news is that these granules can hold a lot of urine. This can be attributed to the high surface area texture of the granules that we discussed above.

Overall, Skoon Cat Litter did a good job of locking in cat waste odors. Keep in mind that this specifically refers to ammonia smell from cat urine. You are intended to be timely in your maintenance. We recommend that you go investigate your cat’s litter box daily and look for wet spots. Any time you see a wet spot, stir it together to help evenly distribute the urine.

You will find that Skoon Cat Litter granules soak up more liquid than just about any silica gel cat litter that you have seen before. This helps to prolong the life of the litter and also keep odors in check for longer.

But you will not want to mess around and delay removing cat feces. The granules do a good job of drying out solid waste (which helps with odor-fighting) but the remaining solid is not captured in any sort of odor-locked shell. So if you let these solids linger too long, then you will likely get whiffs of it.

Urine smells should be locked in for several days and up to a couple of weeks. But once you start to get faint smells of ammonia (even after mixing), it is likely time to replace the litter box.

The actual litter doesn’t have any sort of perfume smell to it. Some people who enjoy the aromatic smell of scented litters may be disappointed by this. However, we (and our cats) have found many of these masking perfumes to be simply too powerful. So we always appreciate a cat litter brands that have options out there to avoid them.

The diatom minerals have a very faint “earthy” smell to them but that is about it.

One aspect of Skoon Cat Litter that you will immediately notice is the size of the granules. These granules are massive! They are much larger than typical clay and crystal cat litters that we have come across.

The main benefit of these much larger granules is that they are much easier to see. This means that spare granules laying on the floor should be spotted. So you won’t have to constantly tiptoe around your cat’s litter box while barefoot in fear of stepping on a sharp granule!

Another benefit of the large size is that overall tracking seems to be kept in check. There is still some minor tracking that we discovered, however. This may be due to a combination of the granules being quite lightweight (so they are easy to move) and the rigid surface of them being more prone to catching on your cat’s hair. But overall, it wasn’t bad.

Dust levels are almost non-existent. This is the norm for most silica-gel like cat litters. We were a bit concerned upon first reading about what this litter is made of since it did mention minerals being involved. But we were pleasantly surprised after using it. You may get some slight dust when pouring the litter but not much beyond that.

As we discussed earlier, you will want to remove solids promptly. You won’t have any sort of hard clumping to work with so keep that in mind while scooping. The dried solids can be quite fragile and may chip or break if you are too aggressive with removing them.

Mixing up liquids is a breeze. But you will find that as the litter gets closer to needing to be replaced, the concoction can start to get a bit pasty. Be sure to empty the litter and replace it before it gets too pasty or you risk it sticking against the litter box walls.

Skoon currently uses a subscription-based format. You can sign up for monthly deliveries of the boxes or bags. We found that a bag can last around 2 to 3 weeks with normal use.

So for us, 1.5 bags per month is acceptable. Your mileage will vary depending on how many cats you have, the size of your cat’s litter box, and how often you are replacing the litter.

At this usage rate, the price point falls into the mid-range price tier. This makes it a bit more expensive than most clay-based cat litter and more affordable than most silica crystal cat litters. This sounds about right to use seeing how this concoction is almost a silica/clay hybrid.

We had a good experience trying out Skoon Cat Litter. From an originality standpoint, this is about as clever as you can get. Using ancient remnants of algae for cat litter? Who would have guessed?

The main selling point with this litter is its great absorption. These granules seem to soak up way more liquid than most other litters that we have tested. And that can be attributed to the granules having a ton of surface area to work with.  With this absorption comes a nice benefit of locking in ammonia odors for long periods.

Solids will benefit from being dried out but since there is no form of clumping, you will need to be timely in their removal.
These are easily the largest granules that we have ever come across. It may take your cat a little while to adapt to such large granules but for many, it may end up being more comfortable to walk on compared to sharp, smaller granules. These large granules seem to track a bit less than their counterparts due to their size. However, they can still be kicked around pretty easily because they are extremely lightweight. We liked that there wasn’t much dust to deal with as well.

The subscription format is becoming more and more common. You have mixed feelings about it: having litter delivered to your door takes away the hassle of having to go to the store and lug it back home. But at the same time, it does make you feel forced to go through cat litter faster than you may normally do (or that is even necessary). We wouldn’t mind if Skoon expanded to some brick-and-mortar stores in the future. But overall, prices are about middle-of-the-road.

If you don’t care about the benefits of clumping and want to try a new spin on cat litter, then Skoon Cat Litter is worth checking out.