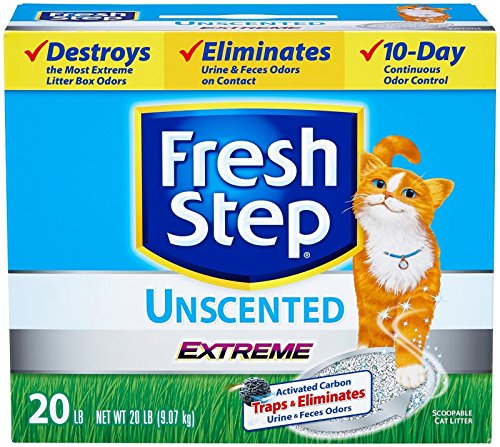 Excellent at sealing in cat odors

This is our Fresh Step Extreme Odor Control Unscented Cat Litter Review.  Fresh Step Extreme Odor Control Unscented cat litter is designed for those litter boxes that are as stinky as they come.  This is accomplished through the usage of CarbonPLUS, which provides extreme odor neutralization, as well as antimicrobial agents which help to stop the growth of odor-causing bacteria.  A 10-day continuous odor control guarantee is advertised.  All of this is accomplished without the use of perfumes and dyes which make this litter good for those cats and owners with sensitive noses.  Available in 20 and 25-pound boxes.

Who This Cat Litter is Intended For

This cat litter is intended for those who have had troubles in the past trying to keep their litter boxes from stinking up the entire room.  This could be due to a very busy litter box or just a particularly stinky cat, but either way, it has been a losing battle.  It is also for people who want to go the conventional clay cat litter route with an unscented litter but are alright having some unique twists on their litter via antimicrobial agents and carbon embedded into the granules.  Finally, this product is targeted at those who are willing to pay a premium to get a litter that works for them.

What Makes This Cat Litter Unique

This cat litter is unique because it tries to tackle a very intimidating and oftentimes difficult challenge: that of keeping difficult litterboxes in check.  It does this in a specialized way but included antimicrobial agents and carbon into the clay, something that a majority of other products don’t try.  Also, it tries to do this while adhering to normal standards of clay litter such as having good clumping.

As with most Fresh Step products, the clumping ability is on point.  The clumps are small and tight and stay hard for as long as you need to properly dispose of them, even in a relatively busy litter box.  About average levels of litter are used to form the clumps.  This is important since this is a rather expensive litter and you want to maximize how long a box or bag lasts.

Despite being unscented there is still an artificial smell associated with this litter, which is likely from the clay and extracts used.  Thankfully the smell isn’t as overpowering as in some other lines so for most cats and owners it will be bearable.

In regards to sealing in the cat smells this does an excellent job, particularly for single-cat households.  You can tell that the CarbonPLUS feature works as intended as even the most active and full litter box seems to put out little if any smell.  If you plan on using this on a very busy litter box try to remove the clumps once every other day and you’ll keep the smells in check.

Easy cleanup but a bit dustier than we would have liked.  The dust also seems to stick to fur and clothes quite well so it is easy to track some away from the back without even realizing it.  We are not sure if this is because of the inclusion of other agents and carbon but it is certainly noticeable.  However, the smells associated with the litter seem to stay locked in so this is a minor complaint.

Buy on Amazon Price not available and save

Online prices for this litter generally fall in the mid to premium-priced area.  This is somewhat high for clay litters but it does at least come with some additional components to make it stand out and justify the higher asking price.

The Fresh Step Extreme Odor Control Unscented Cat Litter Review earns 3.5 out of 5 cats.  Good clumping ability and odor-fighting from the CarbonPLUS feature make this a buy.  It does tackle more difficult litter environments better than most of its competition.  It is a bit on the pricey side but if you should not be disappointed with how it performs and neither should your cat.